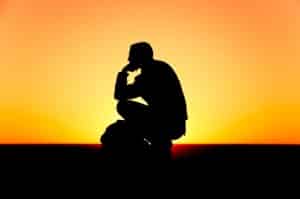 According to the World Health Organisation depression is one of the leading causes of disability worldwide. Over the course of a lifetime 16% of the population will at some time be diagnosed with depression, and in any given year 7% of adults will suffer from depression, with episodes lasting for 16 weeks on average [Ref. 1]. Women are almost twice as likely to be diagnosed with depression, but the reason for this is unknown – one possible reason could simply be that men are less likely to seek help for their problems [2]. Famous people who have suffered from depression include; Abraham Lincoln, Winston Churchill, Princess Diana, John Lennon, Woody Allen, and many others.

Research has also identified some very interesting connections between depression and other mental illnesses. For example a study published only last month (July 2012), which involved more that 13,000 people, found that people with a history of suffering from depressive symptoms were more likely to develop dementia later in life. Specifically, people who had a late-life episode of depressive symptoms had twice the risk, compared to the rest of the population, of developing Alzheimer’s disease, while people who suffered from depressive symptoms both in mid-life and late-life had a three-fold increase in the risk for developing vascular dementia, i.e. dementia resulting from brain damage due to reduced blood flow to the brain [3].

The two most common forms of depression are ‘Major depression’ and ‘Dysthymia.’ Major depression is the most severe form, and can be very disabling, undermining the sufferer’s ability to function normally; to sleep, study, work, eat, and enjoy activities they used to find pleasurable. Dysthymia is a milder form of depression, with less severe symptoms, which do not disable the sufferer as much as with major depression. The symptoms may last for a long time, however, and sometimes interfere with normal functioning and well-being for years.

Signs and symptoms of depression

Depressions shows up differently for different people. Which symptoms are experienced, how severe they are, and how long they last depends on the individual. Below are a some of the more common signs and symptoms for depression. It must be understood, however, that it is perfectly normal to experience some degree of these symptoms for short periods, and that it is only when such symptoms are overwhelming and begin to interfere with a person’s ability to live a normal and active life that there is reason to suspect that they suffer from depression.

A lot of research has gone into trying to establish what causes depression. Nevertheless, there is still no agreement on an exact cause – we simply don’t know. The ‘biopsychosocial’ model for depression suggests that the cause of depression is a combination of biological, psychological and social factors, and a common research finding is that the development of depression is determined by multiple, correlating factors that probably change over a person’s lifespan [4].

Research using magnetic resonance imaging (MRI) has shown that for a person with depression the areas of the brain that deal with thinking, sleep, mood, appetite and behaviour do not appear to function normally, and that neurotransmitters – the chemicals that brain cells use to communicate – seem to be out of balance. But these MRIs do not explain the cause of the depression.

Without identifying what is the cause and what is the effect, there are certain things that we know in regard to depression; that anxiety disorders often go hand in hand with depression; that people who are dependent on alcohol and narcotic drugs are more likely to also be depressed; that people who suffer from physical illnesses such as heart disease, stroke, cancer, diabetes very often suffer from depression; and that depression seems to run in families. And of course, emotionally traumatic experiences such as emotional or sexual abuse, the loss of a loved one, or problems in a love-relationship can sometimes lead to depression.

First of all, depression can usually be successfully treated, even in the most severe cases, and the sooner the sufferer gets treatment the better the chance of recovery. The most common treatments for depression are medication or psychotherapy, or a combination of the two.

Anti-depressants aim at stabilising and normalising the brain’s neurotransmitters; serotonin, dopamine, and norepeniphrine. SSRIs (selective serotonin reuptake inhibitors) are the newest anti-depressants, and are currently the most commonly prescribed. Also common are the SNRIs (norepinephrine reuptake inhibitors), which are similar to SSRIs. MAOIs (monoamine oxidase inhibitors) and tricyclics are older anti-depressants, which these days are primarily prescribed to people who experience high levels of unpleasant side effects with SSRIs or SNRIs.

A large number of research studies, meta-analyses and review articles have found that psychotherapy and psychological interventions are important and effective in the treatment of depression [5, 6]. Furthermore, psychotherapy tends to work relatively rapidly, improvement can be expected in as few as 10 sessions for about half of people who have been diagnosed with depression, and produce lasting effects [7].

Psychotherapy is an active collaboration between the therapist and the client, and the therapeutic relationship that develops between therapist and client is one of the most important factors that lead to the resolution of the problem [7]. Psychotherapy emphasises the importance of the client taking a pro-active approach in therapy, and commonly the client will actively work on certain therapeutic tasks in between therapy sessions, in order to progress toward a successful outcome of the treatment.

“My sleeping problem has totally settled as now I have no problems falling asleep or putting myself back to sleep if I wake in the middle of the night. Some nights, I don’t even stir sleeping right the way through until the morning. I have regained back my old self. This has allowed me to achieve what I set out to do during the day both at work and at home.”