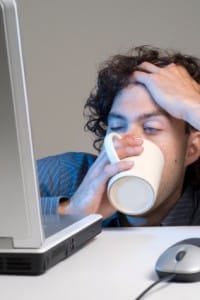 We are such stuff
As dreams are made on; and our little life
Is rounded with a sleep.
William Shakespeare, The Tempest, act 4, scene 1

We all sleep, some more than others, some less. On average we spend as much time sleeping as we do working; 8 hours/day, 56 hours/week – one third of our lives! And yet, most of us know very few facts about sleep, and even to scientists the exact functions of sleep and facts about sleep are still a mystery. What all of us do know, of course, is that sleep isn’t just something we do to fill in time when we have nothing else to do.

One of the undeniable facts about sleep is that it isn’t optional; it is a required activity that is important for normal functioning of both body and mind. And while sleep is mostly restful, it definitely isn’t a passive state where body and brain shut down their activities. Certainly, metabolic rate decreases somewhat, but only about 5 – 10 %, and research has found no indications that any of the body’s major organs or regulatory systems shut down during sleep (Rechtschaffen, 1998). In fact, some hormone secretions increase while we sleep (e.g. growth hormone and prolactin), and some brain activity (e.g. delta waves) increases drastically. Actually, during certain sleep states, many parts of the brain are just as active as they are when we are awake!

The two main states of sleep are called Rapid Eye Movement (REM) sleep and Non-Rapid Eye Movement (NREM) sleep. In the course of a normal night’s sleep we cycle through these states in a fairly predictable pattern. During NREM sleep our eyes, if they move at all, only move very slowly, yet the body’s general physiology is much the same as when we are awake. REM sleep, on the other hand, is characterized by bursts of rapid eye movements (hence the name), back and forth and up and down. This sleep state is also when most dreams occur.

During an average night’s sleep we spend around two hours dreaming. The periods of dream sleep return every 90 – 110 minutes, and are longer and longer as the night wears on. Everyone dreams, but not everyone remembers their dreams, and very few people would be able to recall all of their dreams. The purpose of dreaming is still being discussed by science, with some scientists arguing that dreaming serves no purpose at all, and others arguing that it is essential for mental, emotional and physical well-being.

Facts about the purpose of sleep; introduction

As with the mechanics of sleep, the reasons we need to sleep are still under debate. Many different theories have been put forward, some of which are more intuitively palatable than others. The pioneer researcher, William C. Dement, who in the 1950s was one of the first to intensively study the connection between REM sleep and dreaming, and who knew more facts about sleep than most people of his time, summed up the situation after 50 years of research; “As far as I know, the only reason we need to sleep that is really, really solid is because we get sleepy” (Max, 2010).

Nevertheless, some reasons that have been suggested for why we need to sleep are; Restoration and recovery of various systems of the body; Energy conservation; Protection from predators; Brain development; Memory processing; and Emotional discharge. While each of these suggestions has some merit, neither is free from flaws, which is why the scientific community are still engaged in discussion on the subject. One of the perfectly clear facts about sleep, however, is that sleep is a necessity. If it were not, we would expect to find at least some animals who don’t need to sleep, who don’t need recovery sleep when they lost sleep, and who don’t suffer any serious consequences as a result of sleep deprivation. But no such animal has been found, apart from maybe low-level animals that don’t have brains or have very simple brains.

How much we need to sleep depends on a number of different factors, like age, health condition and individual hereditary factors. Still, there is reason to believe that, ultimately, sleep is necessary for survival. E.g. studies on rats have demonstrated that, if they are totally deprived of all sleep, rats will die within 2 – 3 weeks, a time frame similar to death due to starvation (Rechtschaffen, 1998).

Even moderate degrees of sleep deprivation can be fatal, since the increased sleepiness may lead to impaired physical and mental functioning. According to the American Academy of Sleep Medicine, one out of five serious motor vehicle injuries is associated with driver fatigue, with 80,000 drivers falling asleep behind the wheel every day and 250,000 sleep related accidents every year. Interestingly, research has shown that sleep deprivation can have very similar, hazardous effects as being drunk (Dawson & Reid, 1997; Williamson & Feyer, 2000). In addition to the high risk of car accidents, sleep deprivation can lead to mistakes and accidents in the workplace, and can cause learning difficulties, memory lapses, difficulty with thinking clearly and concentrating, as well as emotional instability.

Read more about why we need to sleep, and what happens if we don’t…

“Your help has pushed me so much further and made my world a far more peaceful place.”