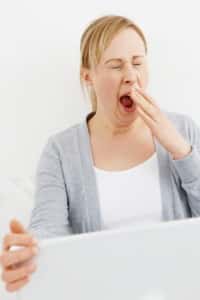 Whilst being mostly restful, sleep is not just a passive event. Sleep is a dynamic, active event that involves specific changes in the physiological processes in the body organs. To study sleep, scientists may use a polysomnograph; a device that measures and records these biophysiological changes during sleep. Typically, a polysomnograph produces graphs of brain activity, eye movements, muscle tension, movement of certain muscles, heart rhythm, breathing, and oxygen levels in the blood. The graphs reflecting brain activity, eye movements, and muscle tension have been of fundamental importance for sleep science.

Rapid Eye Movement (REM) sleep is one of the two basic stages of sleep, the other one being Non-Rapid Eye Movement (non-REM or NREM) sleep. During REM sleep, characteristically, the eyes display bursts of rapid movements, back and forth and up and down. The eyes don’t move the whole time, but when they do move the two eyes always move together in the same direction, just like in the awake state. Likewise, the EEG recordings from REM sleep look very similar to those of the awake state, showing very fast desynchronized brain activity occurring in a seemingly random fashion, i.e. low voltage with a faster mix of frequencies, with no kind of brain waves being more dominating than others.

Paradoxically (and REM sleep is therefore sometimes referred to as paradoxical sleep) the muscles used to move our bodies while awake are limp in the REM stage, and we are almost completely paralysed. Other muscles continue to function as normal however, like the heart, the diaphragm, the smooth muscles of the intestines and blood vessels, and obviously the eye muscles that produce the rapid eye movements. Just as in the awake state, heart rate and breathing rate are irregular. The body temperature regulation, on the other hand, is not well regulated during REM sleep; no shivering or sweating occurs, and the body temperature drifts toward that of the surrounding environment.

While newborn babies may spend more than 50% of their total sleep time in the REM stage, by the time a child has reached age two, this figure has gone down to around 20-25%, which subsequently remains relatively constant throughout life (Kohyama, 1998). REM sleep is also the stage during which most of our vividly recalled dreams occur. A peculiar fact in this context is that, regardless of what the dream is about, REM sleep is normally accompanied by a spontaneous erection (of the penis for men, of the clitoris for women).

Non-Rapid Eye Movement (non-REM or NREM) sleep, the second of the two basic sleep stages is in itself divided into three (or four) stages, each with its own specific patterns of brain activity. As a general rule, EEG patterns during NREM sleep are slower, more regular, and of higher voltage than in the awake state. Body temperature is regulated at a lower temperature point than when we are awake, i.e. shivering starts at a lower temperature than it would if we were awake.

When we are awake, and have our eyes open, brain activity predominantly produces beta waves (with frequencies between 12-30 Hz). Being busy, or actively concentrating and thinking, produces low amplitude beta waves of varying and multiple frequencies, while closing our eyes and relaxing tend to produce alpha waves (8-12 Hz).

This is the stage of very light sleep, or drowsy sleep, the transition from awake to sleep, where the brain’s EEG patterns progress from alpha waves to theta waves (4-7 Hz). During this stage muscle relaxation increases, and we begin to lose conscious awareness of the surroundings.

This stage, which makes up about half of our sleep time as adults, is characterized by two specific brain wave phenomena; sleep spindles and K-complexes. Sleep spindles are bursts of activity in the brain, lasting for at least half a second, consisting of waves at frequencies between 11-16 Hz (usually 12-14 Hz). K-complexes can be described as a high-voltage pair of peaks (positive followed by a negative) preceded by a smaller negative dip, which occur every minute to minute and a half, and are often followed by a burst of sleep spindles. K-complexes may occur spontaneously, or in response to external stimulation such as sounds or skin being touched, or in response to internal stimulation such as interruption of the breathing.

During this stage conscious awareness of the surrounding disappears, and muscular activity decreases. However, sleep spindles seem to follow immediately after muscle twitching.

This stage is referred to as deep sleep or slow-wave sleep. In this stage the EEG is characterized by a minimum of 20% high-voltage slow waves, called delta waves, in the frequency range of 0.5-2 Hz. Muscle activity is low, yet this is the stage where sleep walking may occur. When we are in deep sleep, we are very hard to wake up. When awoken from deep sleep, we feel groggy, and mental performance can be somewhat impaired for up to half an hour.

Deep sleep with a ratio of delta waves exceeding 50%, used to be referred to as NREM stage 4. However, in the last few years, NREM stage 4 sleep has become an obsolete category. All deep sleep, i.e. with a minimum of 20% delta waves, is nowadays categorized as NREM stage 3.

During a night’s sleep, we cycle through fairly predictable, repeated sequences of NREM and REM sleep, beginning with an NREM stage. Each cycle lasts for 90-110 minutes, and is repeated four to six times during a normal night of sleep. In the first part of the night NREM sleep, and in particular deep sleep (NREM stage 3 & 4), dominates the cycles, while REM sleep takes up a smaller amount of time. As the night wears on the REM sequences become longer and increase in proportion, and the NREM sleep is spent mainly in NREM stage 2. It is not unusual that we have a short period of very light sleep, or even being awake, immediately before or after an REM stage in the later cycles of sleep. The figure below (courtesy of the National Institutes of Health) is called a hypnogram, and shows a graphic representation of the cycles of NREM and REM sleep during a typical night’s sleep for a healthy young adult.

How the timing of sleep is regulated

The timing of sleep is regulated by a combination of factors; the biological clock, sleep homeostasis, and to some extent willed behaviour. The biological clock is located in a part of the brain called the hypothalamus. It has a cycle of just over 24 hours, and synchronises with the day-night cycle by means of light stimulation via receptors in the eyes. The biological clock regulates the body temperature, which is at its highest during the day, and lowest in the later part of the night, whether we sleep or are awake. The release of the hormone melatonin is also regulated by the biological clock, so that the levels of melatonin increase during the night and decrease at dawn. As the body temperature goes down and the melatonin levels increase, we become sleepy.

The other factor that contributes to sleepiness is of course the length of time that we have been awake; the longer we are awake, the sleepier we become. This is what is referred to as the sleep-wake homeostasis. The exact mechanism for how this makes us feel a need to sleep is still unknown. It does however reinforce the cycle of the biological clock, in that it makes it difficult to stay awake and keep our eyes open after about 16 hours. As we close our eyes, the light is blocked out, and the biological clock is synchronised for sleep.

About two hours of an average night’s sleep are spent dreaming. Most dreams occur during REM sleep, and can be extraordinary and bizarre, or can reflect realistic experiences, but often do so in a fictional way. Dreams occurring during NREM sleep, on the other hand, tend to be of a more mundane nature.

It is not known where in the brain dreams originate, or even if there is a single origin in the brain for dreams. Brain scanning techniques have revealed that during dreaming there is activity in regions of the brain that correspond with attention, memory formation, motivation, emotion, arousal, and complex visual processing (Hong, Gillian, & Dow, 1995; Braun, Balkin, & Wesensten, 1998). It has also been found that other regions of the brain typically are inactive during dreaming, such as regions regulating intelligence, conscious thinking, and higher-order reasoning.

The purpose of dreaming is unclear, and many theories exist that try and explain the significance and meaning of dreams. Sigmund Freud suggested that dreams are symbolic expressions of frustrated desires residing in the unconscious mind. Other authors believe that dreams are rather attempts to make sense of nonsensical information generated by random firing of neurons in the brain cortex (Hobson & McCarley, 1977).

Lars taught me that a successful marriage means working as a team based on true equality. He taught me strategies for respecting myself and our differences and how to negotiate those differences fairly with empathy so that both our needs are understood and met.