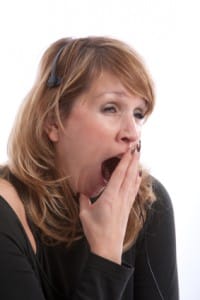 O sleep, O gentle sleep,
Nature’s soft nurse, how have I frighted thee,
That thou no more wilt weigh my eye-lids down
And steep my senses in forgetfulness?
William Shakespeare. King Henry, in Henry IV, Part 2, act 3, sc. 1, l. 5-8.

Insomnia is defined by the World Health Organisation as a problem initiating and/or maintaining sleep, or the complaint of non-restorative sleep, that occurs on at least three nights a week and is associated with daytime distress or impairment. Depending on the stringency in the criteria for insomnia, different studies report insomnia to occur in 10-50% of adults at any given time. Insomnia that lasts less than one month is considered as ‘acute’, and can usually be explained by changes in sleep environment, emotional or physical discomfort, stress and similar factors. When insomnia persists beyond one month, it is considered as ‘chronic’, and has often taken on a life of its own (Smith, Smith, Nowakowski, & Perlis, 2003).
Read a detailed article about Insomnia…

OSA is a potentially life-threatening disorder in which breathing is interrupted during sleep. Episodes of very shallow breathing, or no breathing at all, can occur 30 times per hour or more, and can cause temporary drops in blood oxygen levels and arousal from sleep. Such frequent arousals lead to sleep deprivation and the subsequent excessive daytime sleepiness, which is typical for this disorder. OSA can also lead to headaches, high blood pressure, stroke, and heart attacks. Individuals at high risk for OSA are those with low muscle tone and soft tissue around the airway (e.g., because of obesity) and structural features that give rise to a narrowed airways. OSA treatment may consist of life style changes, such as losing weight, quitting smoking, avoiding alcohol and other muscle relaxants. Dental appliances that reposition the tongue and jaw may help keep the airways open during sleep. In severe cases the use of breathing machines or surgery to increase the size of the airway may be necessary.

RLS is a neurologic disorder that is often associated with a sleep problem, even though it is not limited to sleeping, but may occur throughout the day. It is characterised by uncomfortable sensations, like tingling, burning, tickling, which lead to an almost irresistible urge to move the leg (or other affected body parts). RLS symptoms are usually worse in the evening, and therefore likely to interfere with falling asleep. Exercise, stretching, massage may have beneficial effects on some people, while others require pharmacological treatments. In some cases psychological interventions based on mindfulness practices may provide relief.

PLMD is different to RLS in that it only occurs during sleep, and in particular during the first part of the night when NREM sleep dominates. Movements produced by PLMD are involuntary, and the person is often unaware of having them. Nevertheless, these movements can be highly disturbing to the quality of sleep, and lead to excessive daytime sleepiness. PLMD sufferers are advised to refrain from alcohol, caffeine, and anti-depressants. Pharmacological treatments may be necessary.

Narcolepsy is a neurological sleep disorder that is characterised by an overwhelming daytime sleepiness (even after adequate night time sleep), making the person fall asleep without warning at inappropriate times and places, regardless of what activity they may be involved in at the time. Night time sleep may also be fragmented, and whereas most people do not experience REM sleep until after 90 minutes, narcoleptics generally enter REM sleep within 10 minutes. Narcoleptics may also experience cataplexy, a muscular weakness (ranging from a barely noticeable slackening of facial muscles to a total collapse), brought on by strong emotions. Narcolepsy is primarily treated with pharmaceuticals.

NREM parasomnias occur during stage 3 (& 4) sleep, and are caused by activation of the autonomic nervous system, the motor system (the part of the central nervous system that is involved with movement) and/or the cognitive system, so that the person experiences a state in between being asleep and being awake. NREM parasomnias can sometimes be triggered by alcohol, sleep deprivation, emotion stress or depression. Examples of NREM parasomnias are sleep talking, sleep terrors, sleep walking, sleep eating, and teeth grinding during sleep.

REM parasomnia most commonly occurs as REM Sleep Behaviour Disorder (RBD), a disorder where the muscle paralysis that normally accompanies REM sleep is absent. Because the muscles are not paralysed, the person may act out their dreams, and thus cause harm to themselves or others. RBD typically occurs later in the night, when REM sleep and dreaming is most prevalent. It tends to predominantly affect males over 50 years of age, and may be associated with neurodegenerative disease (Boeve, Silber, & Ferman, 2004).

What Relax-the-Mind Sleep Therapy can and cannot help with

Relax-the-Mind Sleep Therapy was specifically designed for helping people overcome the most common sleep problem, insomnia. It has proven to be a successful treatment for people anywhere on the sleep problem continuum; from people who only intermittently struggle to get good sleep at night, to people who have been dependent on sleeping tablets for years.

Nevertheless, even though they are not the primary target for which Relax-the-Mind Sleep Therapy has been designed, we still expect it to have positive effects on some of the other sleep disorders mentioned above, such as Periodic limb movement disorder, Restless legs syndrome, and NREM parasomnias.

On the other hand, Relax-the-Mind Sleep Therapy cannot help with sleep disorders such as Narcolepsy, REM-Sleep Behaviour Disorder, or Obstructive sleep apnoea (OSA). However, to the degree that someone’s OSA is related to an unhealthy lifestyle (e.g. overweight, smoking, alcohol), I may be able to help them e.g. with counselling and psychotherapy, but that is a different treatment path than Relax-the-Mind Sleep Therapy as such.

To find out more, and to make an appointment, don’t delay, contact me today!

“Since our sessions I am no longer constantly tired, and my marks at school have also greatly improved. If I ever feel overwhelmed by feelings, I use the techniques that you taught me, and that helps me and clears my mind.”